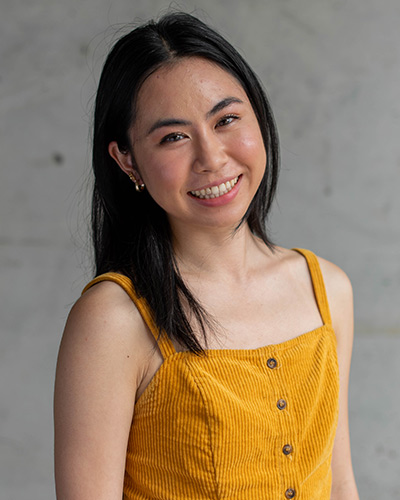 Claire was raised in Atlanta, Georgia starting at age 7, after living abroad in Taiwan for a few years. She was originally trained as a competitive gymnast for 7 years but later transitioned to dance at age 11. She explored different styles including ballet, modern, jazz, tap, and hip hop, and interestingly, at first, ballet was her least favorite style. However, she was influenced by her first ballet teacher, appreciating the art form and strict erudition which led her to pursue training in classical ballet. Later, she also studied Chinese folk, competing in YAGP New York finals in 2019 in contemporary ensemble. After being at 3 different studios in 4 years, she was delighted to join Terminus Modern Ballet School PTP in 2019 where she has felt at home ever since. Claire has attended summer intensives at International Ballet, Colorado Conservatory of Dance and Boston Ballet, under distinguished teachers including Danita Emma, Momchil Mladenov, Karin Averty, and Andrea Renee Long-Naidu. She was also given opportunities to explore and choreograph contemporary repertoire with Dominic Walsh and Mario Alberto Zambrano, leading her to have a passion for the contemporary style. Grateful for the opportunity to be a part of the protegé program, she is continually inspired by the TMBT company members.